I recently visited Chris Summer in his studio in a small town near Cologne. We spent a fun evening together over a few beers and pizza, and of course we talked about and listened to a lot of good music.

I didn’t really do a formal interview, but over the course of that evening I learned a lot about Chris Summer, and I think this is worth sharing.

Talking about sharing: Here is a bangin’ DJ set that he gave me to share with you.

Chris Summer is a really relaxed and friendly guy, and it is hard to imagine that the first party he organized ended in disaster:

“I was still at school, and I had organized a party for my schoolmates and some alumni. It seemed to go really well at first: A lot of people showed up, a band played, and everybody was in a good mood. I started my set at around 10pm, and I hadn’t even played my second record when a few idiots started a fight and I had to stop the party.”

This disaster didn’t remain the last in Chris’s DJ career: Fire extinguisher abuse, broken arms and retarded drugheads are just a few of the obstacles he encountered at parties. However, his love for music kept driving him and with more than 10 years experience in DJing and producing, Chris Summer certainly knows what he is doing.

“I got hooked to electronic music in the early 90s, but I have tried out lots of different styles since then. For example, I was the DJ and beat producer for a HipHop project for quite a while. I really liked turntablism, but my beats were always a little too electronic for the MCs, and their vocals were a little too much gangster-style for me. I even produced the music for a cinema ad once that  ran nationwide, but I always kept coming back to electronic music.”

Apart from a few commercial releases and remixes, Chris Summer is an active member of the Creative Commons (CC) community. The idea behind Creative Commons is to release music under a license that makes it legal to share and build upon those releases.

“I stumbled over the CC community when I was looking for some nice vocal samples. I was surprised how much great material you can find, and I think that CC releases are a great way to connect and promote yourself. For example, I had very positive feedback on my CC releases from all over the world, and it really blew me away to know that people from Australia or the USA liked my stuff and even played in their radio shows. However, I still release some of my music under commercial licenses. Being a multimedia producer, I just have to live off of something, and if I put in a lot of effort into producing a track and do commercial mastering and all that, I just can’t give it away for free.”

Even though Chris clearly enjoys DJing, he wants to focus on producing music in the near future.

Apart from an upcoming release on Puuhh Records, his network and experience seems to start paying off.

“I got to know some really great musicians, and I am planning remixes and productions with them right now. For example, I got to know a really great singer from a Cologne-based Rock band. She is used to a totally different style of singing than what you hear on most electronic music releases and I think this could become a very interesting collaboration.” 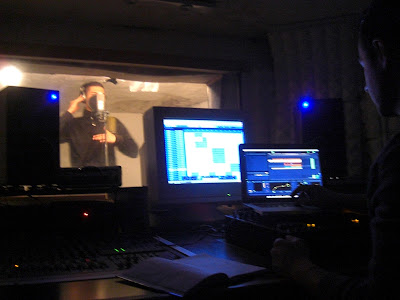